Text editing from the command line with vim

When learning bioinformatics, you will perhaps need to create or edit text files, shell scripts or Python scripts from the command line. Using a Unix-based text editor is also good practice for getting used to the environment if you are new to the command line. I have seen that many people have their preference for nano, emacs or vim. I started with nano, as it is quite straightforward to use - but then I moved to vim (probably because it had lots of colours).

If you tried using vim, you may have noticed that it’s not as straightforward to use. Vim has modes, and if you’re pressing the wrong keys in the wrong mode you might have found yourself stuck in vim.

At the moment, I know the bare minimum basics of vim - so in this blog post, let’s learn some vim together. For a list of the commands I cover, skip to the end of the post.

Before we start - if keys are pushed and vim won’t let you leave, simply hit the Escape key and then enter :q to quit.

Let’s start by creating a little bash script with vim. Move to the directory (with the cd command) where you want to make the file, then type:

If this file doesn’t currently exist, vim will open a new blank file. If it does exist, it will open the file for you to edit; creating a new file and editing an existing one are both done with vi <filename>.

Vim will start off in command mode - you can’t type anything in. To enter insert mode, press i. You can see this down the bottom of the terminal - it says -- INSERT --.

In insert mode we can type things in. Let’s write a short bash script. Type in the following:

Now we want to save this new script, exit vim and run it.

To leave insert mode, press the Escape key. Now we are back in command mode - there’s no ``– INSERT – at the bottom anymore. To save and quit, type and enter :wq`. Your command appears down the bottom of the terminal.

Commands in vim start with a colon. w means write, as in write the file to disk (save it), and q means quit. So we just gave the command, “save this file then exit”.

Now we’re outside vim and can run the bash script to see how it works. First, we need to make it an executable file so that the computer can read the commands we wrote in it:

Then we can try running the script:

Which it isn’t! Opening, editing, saving and closing a file is as simple as that.

Moving around and moving things around

To move around within the file (these are not the only ways, but I find simplest):

Now let’s add some more text to this bash script. After the terminal is done with telling me about vim, I want to run FastQC on some sequencing reads. Let’s say they are in the /RAW/Lappan/totally_real_data/ directory.

In vim, enter insert mode i. You can paste text that you have copied from other places into vim (or anywhere on the command line) by right clicking.

Turns out there’s not really any data in that directory - I don’t want to run FastQC on it anymore. To delete these lines, press Escape to go back into command mode and:

Or, seeing as I don’t need to run FastQC and I like the file how it was in the first place, we can leave vim without saving by using :q!. Be careful when you type that ! - be sure you don’t need to save because vim won’t ask you!

Those commands are what I find most useful to know. There are many more, with a nice list here: https://www.maketecheasier.com/vim-keyboard-shortcuts-cheatsheet/.

Something I like about vim is the colours. To get a good idea of what the current colour scheme looks like, let’s have a look at a more substantial file that already exists. You should have a file called .bashrc in your home directory - we can open it up with the following command. If you don’t have a .bashrc file, find a Python script .py or shell script .sh to open. 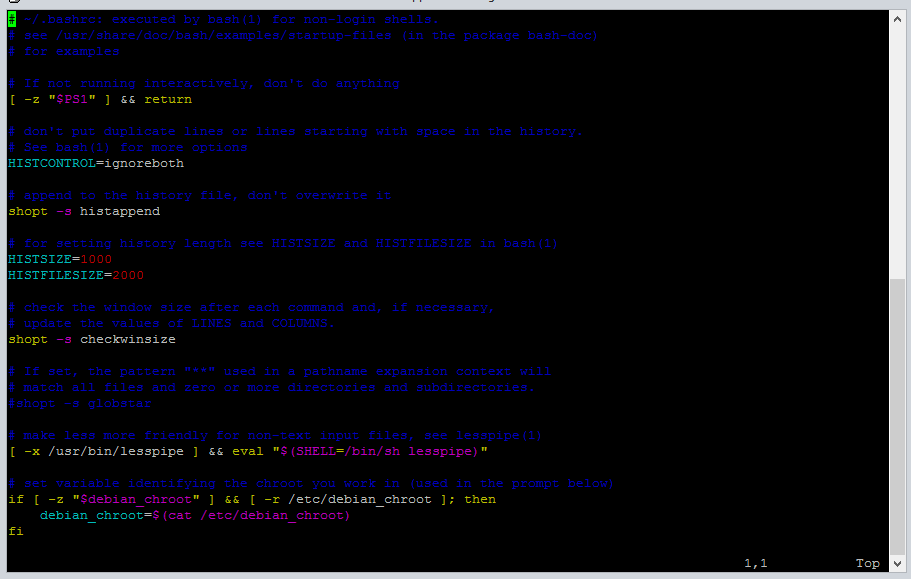 Sometimes, the colours might be difficult to see, like in the image above. To change the colours to the desert colour scheme, while you are in vim, enter: 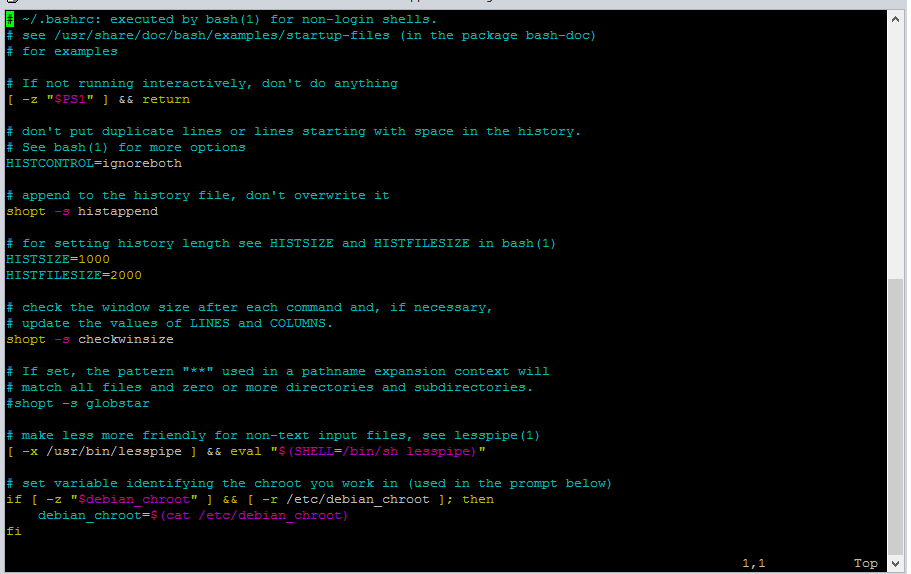 You can check out some other colours by typing :color (with a space at the end) then pressing tab to cycle through. Yes, there’s one called elflord.

However, this colour change will only apply to your current vim session - if you leave and open another file, it’ll be back to the old colours. Let’s quit vim (:q) and make this change permanent:

This is a configuration file, like your .bashrc file, but for vim. In this file, enter insert mode (i) and add the line:

Then exit insert mode (Escape), and save and close the file (:wq).

Files opened with vim will now always have that colour scheme. If it hasn’t updated, you may need to “refresh” by sourcing that file:

That’s it for now, though there is much more to learn about vim. Here are the commands I covered in this post:

If you have any questions or comments, find me on Twitter or email me!